Confessions of a Feminist Screen Printer
Subscribe to our newsletter and receive 15% off your next order!

Confessions of a Feminist Screen Printer 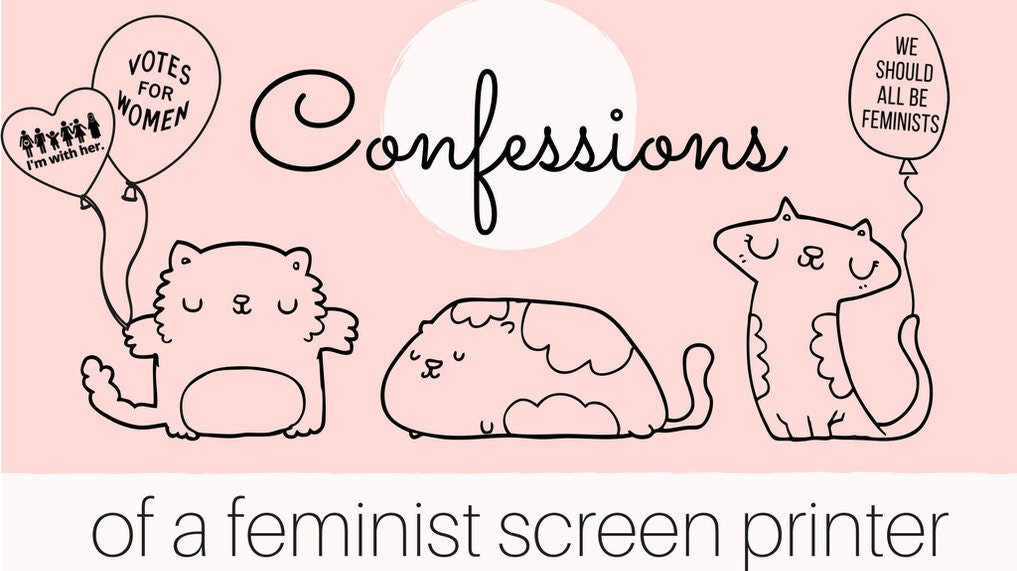 Before I confess, I want to tell you my story.

It was called “Oh my god, I’ve just had the profound realization that I’m a feminist, and I’m a stay-at-home mom in a rural Utah community that will eat me alive for saying so.”

Around that time, I watched a PBS series called The Makers. (It’s really good, watch it). It was a guided tour through women’s history. I watched footage of Kathrine Switzer, the first woman to run the Boston Marathon, as the owner of the race literally chased her, trying to bodily pull her from the race. I learned who Alice Paul was. I saw images of men and women marching in the streets, holding homemade signs and wearing shirts that said “ERA Yes.” 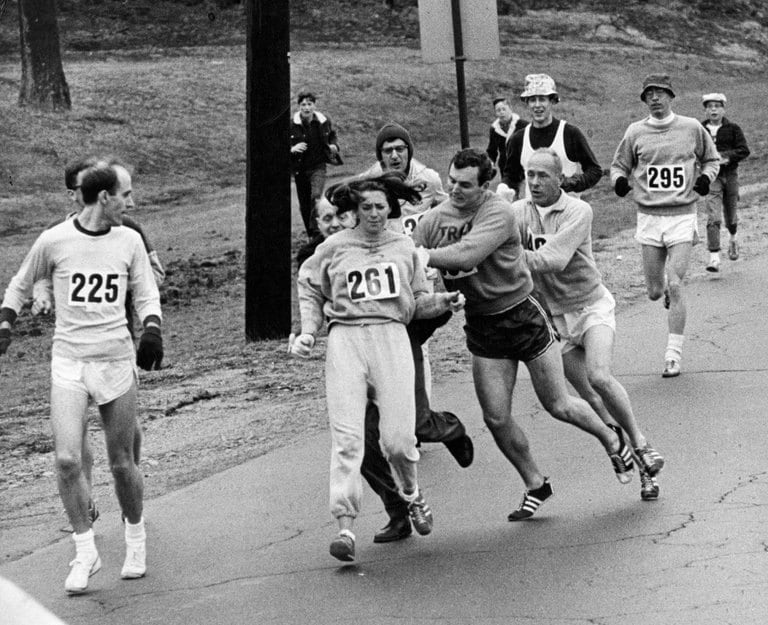 I desperately wanted to wrap myself up in their energy, their courage, their stories, as I walked into my own battles and claimed my own voice. I wanted a touchstone to remind me I wasn’t alone in my struggle. And that I came from “a long line of madwomen,” as MariJo Moore puts it. So I poked around the internet. I typed “feminist t-shirt” into Google and Etsy. And I found about three versions of a Hanes Beefy Tee that said “Feminist as F*ck.”

And since I wasn’t particularly interested in wearing an aggressive potato sack, I decided that I would figure out how to make my own touchstones.

I searched for “women’s history memorabilia” on Ebay and used the yellowing pamphlets, pins, and illustrations as inspiration for my designs. I pored through museum websites and read books about the women and the movements I’d never learned about in high school or college. I took notes from screen printing forums about inks and emulsion and mesh count. Then I found some shirts I really liked and spent a lot of nights getting inky in my basement bathroom (I know how that sounds, but it was SUPER unsexy).

And the shirts turned out great. I wore them while I did some really hard work, figuring out who I was, what I was doing with my life … and moved away from rural Utah. I got a few requests from friends, who wanted to wear the shirts too. So I made a few more. And a few more. And ultimately created and grew an Etsy shop called Fourth Wave Apparel.

Good story, right? I think so.

But here’s the thing. My confession, if you will. Sometimes I don’t know if what I set out to do was worth it.

Sometimes I look back on that passionate, naive person I was in 2008, filled with a newfound feminist awakening and a buttload of ambition, and I want to tell her to learn how to crochet tiny cactuses, or paint dogs doing yoga, or make rainbow-colored soap instead.

Because I will never, ever get this GD thing right.

I can’t tell you how many times I have heard the following, either in comments, messages, or articles published in various blogs. And as feminism has re-entered the spotlight in a dramatic way over the past few years, the conversation has ticked up too:

And you KNOW that guy painting yoga dogs, or that woman who crochets tiny cactuses on Etsy doesn’t get that kind of flack.

So, like I said. Sometimes, as I lay in bed at night in my “Resting Bitch” sleep shirt that I made and then stopped selling because I wasn’t sure if it was too problematic, but I still really like, I think those thoughts. The comments and articles roll around in my brain, and I wonder if I made the right choice. If my good intentions matter. If I should donate all my money to Planned Parenthood and go back to a day-job writing about scented candles. Or learn how to paint yoga dogs (or maybe cats—I don’t want to step on any toes) instead. But so far, I’m still here. Because in less public ways, I also hear from the woman who got up this morning, put on her “Votes for Women” t-shirt, and left the husband who has been physically and mentally assaulting her for the past 10 years. From the girl who is in counseling because she isn’t sure she wants to be alive anymore, and found some comfort and delight in a “Purrrsist Baby” t-shirt (I can do cats too!). From the gay man who just came out to his family and friends, and decided he’s ready to wear his identity on his sleeve with “Love Is Love Is Love.”

And the pushback I get? (Well, me and the entire “marketplace feminism” movement that has freaking EXPLODED). I’m trying to separate the crap from the kernels of truth in all of it. (And if you have some perspective or pearls of wisdom, I’d love to hear them, because some of these issues are just the water I’ve chosen to swim in). It seems to come down to profits, intersectionality, and words versus deeds:

I feel this one hard. Especially when it comes to issues like gun violence, rape, domestic abuse, etc. When I get requests to make a shirt promoting gun reform, or calling out rape culture, or supporting survivors, I know that this criticism is coming. But at the same time … you want a shirt. To express yourself, to start a conversation, to rally. To wrap yourself up in your ideal. Walmart isn’t going to make a shirt like that. And you don’t have the equipment or expertise to make it in your own basement. So there’s me.

And as an average human in this society (which is all kinds of capitalistic), I have a mortgage, and food to buy myself and my kids, and effing outrageous health insurance premiums. So, I can write marketing copy for a candle company during the day to earn that money. Or I can print t-shirts with messages I believe in wholeheartedly.

When I can, I give back a percentage of my profits to organizations I believe in. I love the fact that I can do that. But I’m stuck with the same realities you are when it comes to the cost of living.

This one is hard too. I’m a white feminist. Really, really white. And I live in America, where racism is the air everybody has been breathing forever. And I’m a cis woman. Both those things mean I have a lot of privilege. Some of it’s examined, and some of it is unexamined, which has and will come up. And every time it happens, I feel like an idiot. But, that’s real life, and that’s on me to deal with. 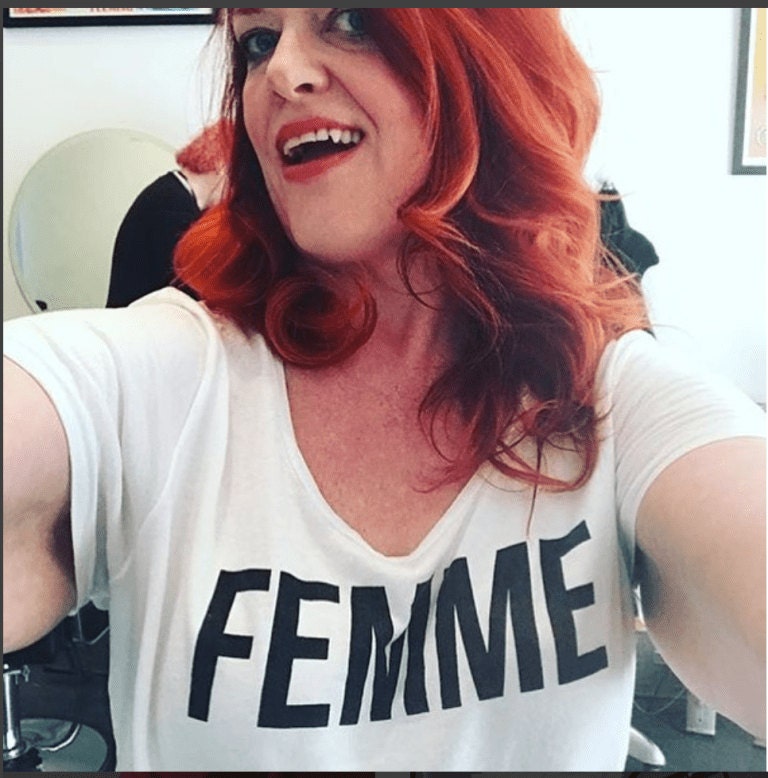 What I struggle with is this: If I don’t include a lot of messages and images from communities I want to support and intersect with, that feels exclusionary and wrong. Because my shop becomes a mirror of who I am (a white, cis feminist). But if I do include those messages, I’m potentially taking sales away from black, latinx, gay, trans, and other marginalized communities that are putting those messages into the world. I don’t want to compete with that. And I don’t want to appropriate it. That line between inclusivity and intersectionality, and infringing on the very communities I want to support and intersect with, is a hard one for me.

For now, I’ve decided I will use my social media channels to share the voices of members of communities I want to intersect with, while keeping the items in my shop to messages I represent personally to at least some degree, while making those messages as inclusive as possible. For example, I have a shirt with the word “Femme” on the front. It’s the root of the word “woman” in every romance language, and it’s also a term used in the queer community. The response has been primarily positive. I see women wearing my shirts who own the term “femme” in the queer community and beyond.

If you have suggestions for a better approach, I’m all ears.

Words vs. Deeds Is Problematic

This one isn’t that hard. But it’s still the subject of almost every op-ed piece I read about “marketplace feminism.” Yes, words without deeds are meaningless. But how in the world do you know that the person wearing a shirt that says “feminist” isn’t walking the walk too? And I’m sorry, but I don’t know ANYBODY in real life who claims the word “feminist” to be cool. I asked 15 young women if they considered themselves feminists when I volunteered as a panel judge for a scholarship program, and I didn’t get a single yes. The word “feminist” is still as divisive and maligned as they come. And the women and men I know who are willing to claim it are also the same men and women who put their deeds alongside their words and work for change. Who are active members of NOW and Moms Demand Action. Who march beside me for science, for gun violence prevention, and at the Women’s Marches. Who show up for town hall meetings with their representatives, who vote in their midterm elections, and who champion causes and projects that make the world a better place.

This post got long. Thanks for sticking around. I’m passionate about what I do, even if some days I feel like curling up in my “Resting Bitch” shirt and calling it off. 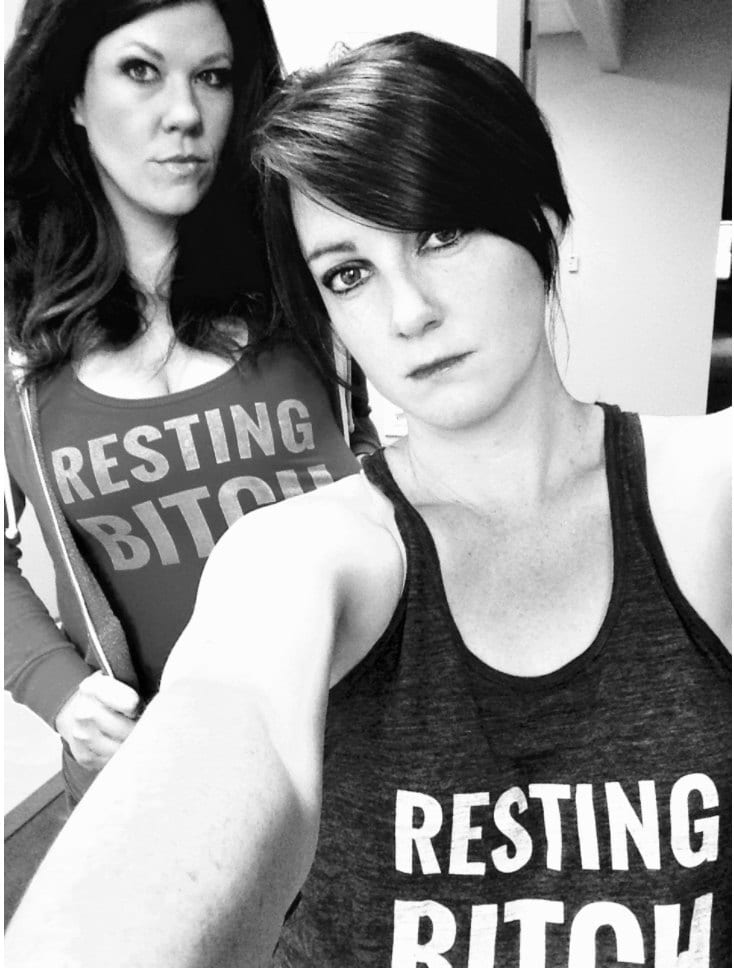 Ultimately, it’s this quote by John Steinbeck that I come back to.

“And now that you don’t have to be perfect, you can be good.”

Ten years ago, feminism gave me the tools I needed to let go of the “perfect” girl I used to be. And I’ll continue to spread the word of equality, empowerment, and change the best way I know how. It won’t be perfect. But it will be good.

Previous Post Feminism: This Word Does Not Mean What You Think It Means
Next Post 10 Popular Songs That Will Make Your Feminist Ears Bleed
0 items in your cart